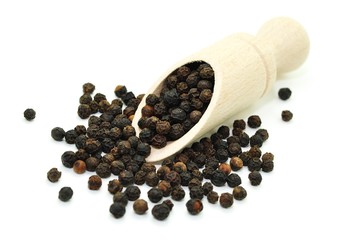 Black pepper is carminative and discourages gas formation in intestine while the outer layer of it helps in breakdown of fat cells. It warms the body helping to get rid of the toxins from the body.   It contains curative properties for constipation and sluggish digestion.

Irrespective of our age we want to have strong memory and sharp brain.  There are many herb and spices which help improve the functiong of the brain.  Black pepper is the commonly used spices helpful for brain functioning.  Piperine in black pepper helps brain function along with lowering depression.   It has also been proved useful in treating mood disorders. A study relating to brain’s affinity to various substances, revealed that  our brain easily absorbs piperine indicating brain protecting benefits of black pepper.

Black pepper can also help addicts to quit smoking and is used in smoking cessation treatments.

Piperine in black pepper has been credited for anticancer properties by Canadian study. It helps prevent the colon cancer by reducing the stress on the rectum. It had been useful in prostate cancer too.

Black pepper is great reliever in cold and cough.  The pepper is known for stimulating circulation and the mucous flow. Further if combined with honey, its effect is enhanced as honey is a natural cough suppressant.